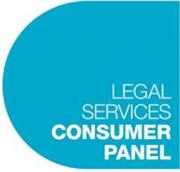 The Legal Services Consumer Panel (LSCP) commissions an annual snapshot of lay users of legal services. Interestingly, but not illegitimately, its dominant focus is competition, not service or access. One finding from this year’s LSCP Tracker survey is a reminder that we need to be careful when thinking about surveys in asymmetric markets. Consumers rate will writing as the best in terms of value for money. It will be recalled that the regulators and professional bodies almost all thought there was sufficient quality problems in the market to require regulation when they attempted to bring will writing into reserved legal services. Only Chris Grayling stopped them. So, an impish interpretation is that consumers rate highly the one area of the market where most regulators thought (think?) there needs to be more regulation. But what are the main, less mischevious, messages…?

If competition is what one is after, the findings make depressing reading. The proportion of consumers saying they shop around before choosing legal service providers remain stubbornly low and is not improving on the last three years of figures. Over a third of conveyancing clients don’t get fixed fees. 44% of consumers do not find it easy to make comparisons between different legal service providers. Reputation, price, and specialisation are what they say guide their choices.

Figure 2 is perhaps the most fascinating element of the study. It shows us how consumers see VFM and choice. The low ratings for personal injury services are especially intriguing. What is driving these rating so low? Uniform ways of charging? Service standards driven down by the squeeze on recoverable costs? A disregard for clients who are not ‘really’ paying, or are only paying out of damages? Self-fulfillingly low expectations (legal aid clients used to expect lower standards of service because they ‘knew’ they were getting something for nothing.

Another mainstay of the high street, family law, shows higher choice but poor value for money in the eyes of consumers. Is this a reflection of the inevitable misery of a family dispute or something over which lawyers have more control? One cannot escape noticing also that some of the staples of social welfare law creep into the bottom right-hand quadrant in contrast to the staples of High Street private practice. 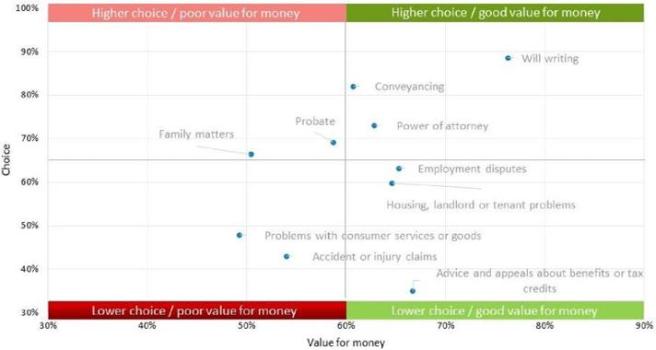 There are signs of rationality, albeit I would venture limited, in consumer thinking. Conveyancing appears much more price sensitive than probate: “Price is most important in choosing conveyancing compared with other service areas (82%), while a lower proportion of those choosing a probate provider rate price as important (65%).” Post LASPO decline continues: those receiving
free legal services have reduced from 24% in 2012 to 13% at present.

The Panel expects to see the impact of prescribed rules for publication of prices to be picked up more fully in next year’s survey. Only 12% of supplies appeared to get the prices from websites, advertisements or comparison websites this time round. Failure to see a significant increase in these figures will represent significant embarrassment for regulators. Can regulators really stimulate competition this way? We will see. And while the report makes optimistic noises about improved choice, it’s worth noting that the proportion of consumers saying it’s easy to make comparisons between providers has remained remarkably steady for eight years at about 56%. If consumers can’t compare, they are not exercising meaningful choice.