The Cabinet Office and the Office of the Parliamentary Counsel have published a very interesting report criticising the complexity and quality of legislation and suggesting a much greater willingness to do something about it through a Good Law initiative.

In the course of this review it appeared evident that while users would like legislation that is simple, accessible, easy to comply with and not unnecessarily burdensome, at present those are not the features of modern legislation.

Some of the reasons for legislation falling short of what users hope for are inescapable. But there are other factors which ought to be within reach of government, Parliament, publishers and others – either acting in their own sphere of influence or in partnership.

For that to happen, there needs to be a shared ownership of, and pride in, our legislation. And pieces of legislation need to be regarded not just as documents in their own right, but as parts of a larger mosaic of legislation. It is the aggregate to which the user will have access to.

There also needs to be a stronger incentive on all involved in the process to avoid generating excessively complex law, or to act positively to promote accessibility, ease of navigation, and simplification.

The Guardian are hosting an online debate at 12 noon today (Friday). The extent to which simplification is possible and desirable is, of course, a matter for debate; and a debate which will have to encompass the sometimes counter-productive approach of common law decision making; but the prize for any progress on the initiative is improved in efficiency, effectiveness and access to justice (see here for my previous thoughts on that subject).

A sense of the complexity is shown by this diagram of the links between when looking at the current in-force state of just one Act. 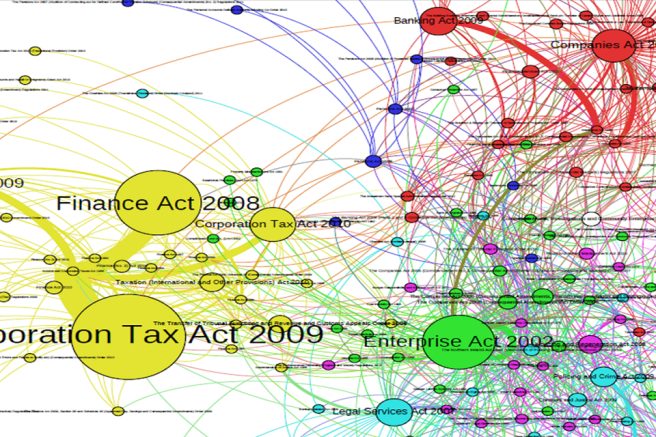 That legislation.gov.uk should not be an up-to date and public database of statutes in force is something of a scandal given that, as citizens, our ignorance of the law is no excuse even, as this report shows, if that ignorance is inevitable. Publishers put substantial resource into current law together and making it (more) intelligible; but then sell it on to those who can afford it. It will be interesting to see whether there is any incentive on them, or suppliers of legal services to provide anything approaching digestible access to the law. What we really want to see is a People’ Halbsury’s Law of England – a Hurculean task (and one requiring a name the public rather than us lawyers would recognise). LSB/LSCP research suggested that the public is mistrustful of private providers doing this job (partly, I suspect, because provider information tends to rather quickly signpost the user towards paying for advice). Unbundled service providers have more of an incentive to produce genuinely useful information, but risk significant investment which cannot be recouped. Universities have something of an interest in getting involved for the educative benefit of their students; and as part of their broader mission to engage with the public; but that interest has real practical and resource limits. Furthermore, as we are beginning to see as regards pro bono clinics, these kinds of initiatives risk being used as part of a process of differentiation or marketing by law schools. This militates towards reinvention of wheels and fragmentation.

So the path towards good information about law; never mind good law, is a difficult one, facing significant obstacles; but it merits significant support.

2 thoughts on “Good law, and the Peoples’ Halsbury”